↓
Home Menu ↓
Home→writing→essays→Nutballs and the Mode 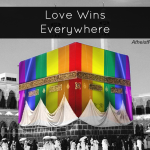 Recently, Atheist Republic (AR) posted this image (⇒) in response to the Supreme Court’s decision (pdf) that legalizes marriage in the U.S. It is a Photoshopped image of the Kaaba in Mecca. The reaction from noisome elements of the Muslim community has been, predictably, swift, violent, and largely incoherent (cf. the Facebook post or AR’s original Twitter post for a sampling). AR’s post is fine; I think it is timely, in good taste, and makes a good point. However, I think AR made a mistake.

AR responded to the growing shit storm in a subsequent post on their web site (WARNING: one image, about ¾ of the way into the post, is deeply disturbing†), electing to show a number of select examples of the insults and threats they’ve received to make a point:

Please keep in mind that these aren’t members of ISIS or Al-Qaeda making these statements, but rather are your everyday average Muslim.

…these aren’t extremists or jihadists, they’re just average Muslims. These are the ones who call themselves “moderate”.

And, if you are feeling particularly thick-headed:

To make it clear that these are supposed “moderate” Muslims, I’d like to point out that we know for a fact that one of these men is a US citizen. This particular commenter has specifically asked for information from one of our admins that he suspects lives in his area, and threatened said admin with physical violence against this admin and their family. 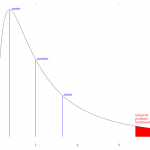 A skewed distribution (click to embiggen). Where do you think IPLs reside?

One thought kept nagging me as I read AR’s response: AR furnishes no valid evidence or argument to support the all-too-common claim that these select nutballs are “your everyday average Muslim” (as opposed to the crazies that carry out terrorist attacks in the name of their religion or, more accurately, their ignorant, deranged ideology‡). It seems likely to me that the cretinous whackjobs sprinkling AR’s posts with turds are neither average nor representative of Muslims in general. These whackjobs are—like our own noisome right-wing nutballs—an abnormally incoherent, ignorant, and vocal minority. I’ve no doubt average Muslims are as willingly delusion-controlled as our average Christians here in the U.S., but I have to question that the infantile profane loudmouths of either organized delusion system lie anywhere near the peaks (i.e., the modes) of their respective population distributions.

The excerpts above—and, indeed, AR’s entire argument—illustrate several common logical fallacies. In the first two excerpts, the author is arguing by assertion. This is a counterproductive rhetorical tactic. It raises people’s hackles, to your disadvantage.

The third excerpt is somewhat more interesting. First, it cherry-picks an anecdotal example. (The example itself also seems hardly relevant—a red herring.) This is a surprising mistake, since cherry-picking is perhaps the most common logical fallacy for which rationalists such as AR criticize religionists and the right-wing.

In this excerpt the author also equates being a U.S. citizen with being “moderate”, with no supporting argument or evidence. As recent events in the U.S. have shown repeatedly, there is nothing moderate about the beliefs of U.S. terrorists, Muslim or not. This is  a false equivalence, perhaps the second most common logical fallacy employed by the right (or maybe the third, behind strawman argument).

This is not an apology for “average” adherents to horrifically damaging organized delusion systems. From all that I’ve seen, Western religions are among the most senseless and destructive invented concepts in the history of humankind. But accuracy, precision, and validity in our claims and arguments, whatever the context, matter.

We rationalists are—or should be—better than this.

† Seriously, you do not need to see this image—it cannot be unseen.