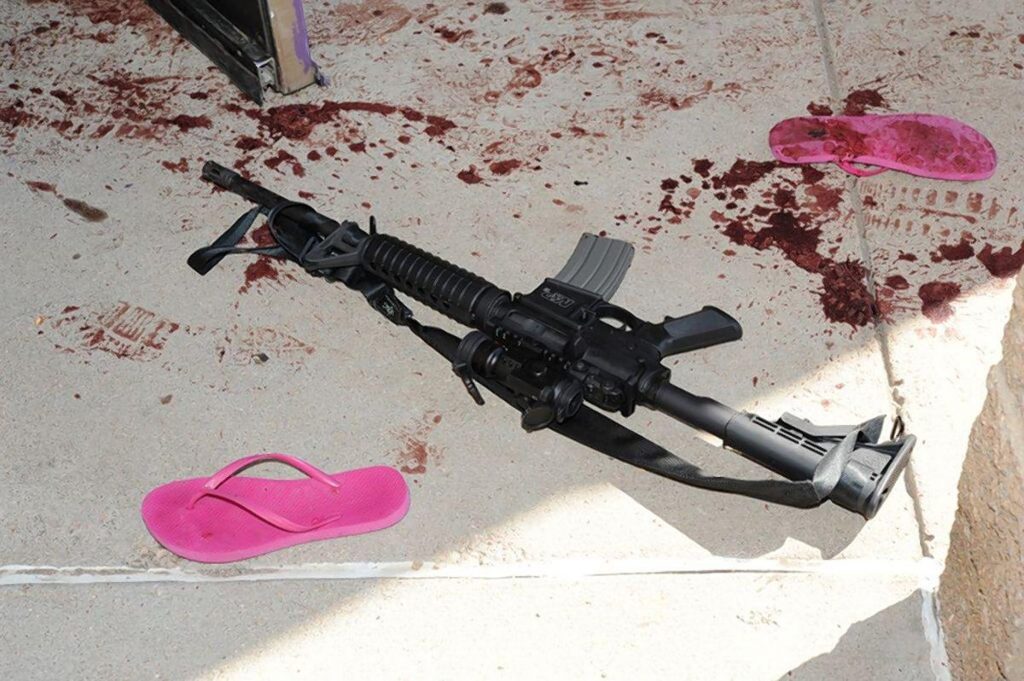 This uniquely American obscenity — frequent mass shootings — is not related to mental illness. The rates of mental illness in the U.S. do not differ from those of other nations[2,11]. It is not related to crime rate. The U.S. is not more prone to crime than other developed countries[6,11,13,17]. It is not related to racial diversity issues. Pointedly, in this era of blatant self-serving liars infesting our nation’s statehouses, Congress, and the White House, America’s gun problem is not related to immigration[4,7,14]. Every study that examines this has found that recent immigrants — documented or not — are less prone to violent crime. Our gun problem is also not related to video games[5]. It is none of these things, nor is it primarily due to anything else. America is suffering a disastrous public health problem[16], and we have long known how to substantially reduce it[1,11]. The largest causative factor for mass killings is simply this: the number of guns. More guns, more gun murders.

A corollary of this fact is inescapable: reducing the rate of gun ownership reduces the rate of gun murders. The relation is clean, and its interpretation is unambiguous[11].

Every other developed nation on Earth has already not just discovered this but has acted upon it to protect and to better their own societies — and it has, with no exceptions, worked. Further, every evidence-based, peer-reviewed study of this relation has verified that the relation is causal — that it is factually true.

What about mass killing lethality — the body count per mass shooting? This is not directly related to the question we’re examining here of why we, alone among all nations, have so many mass killings. But any discussion of mass killings in America would be remiss if it did not point out that the death toll from our daily rate of mass shootings — 347 in calendar 2017, for example[9] — is as high as it is not just because of the frequency of mass shootings but also because of the nearly unrestricted lethality of our readily available weaponry:

In my large file of mass murders, if you look decade by decade, the numbers of victims are fairly small up until the 1960s. That’s when the deaths start going way up. When the AK-47s and the Kalashnikovs and the Uzis — all these semiautomatic weapons, when they became so easily accessible.
— Dr. Michael Stone, forensic psychiatrist, Columbia University[2]

(Emphasis mine.) Ready availability of guns is the American Problem. The unjustifiable, immoral lethality of automatic and semi-automatic weaponry that is so easily available to Americans greatly compounds this American Problem of mass shootings.

Another notable difference about the U.S. and guns is this: America, along with only two other countries in the world (Guatemala and Mexico), adopts a most peculiar stance — an attitude that has proven to have been horrifically corrosive to American society. Alone from all others, we think that gun ownership — a priori, with no justification — is an inalienable right that stands alongside such real inalienable rights as life, liberty, equality, freedom of thought, and the freedom to pursue one’s own happiness.

This “right” to unrestricted ownership and use of firearms, this uniquely American intellectual and cultural obscenity, is the polar opposite of the rest of the world’s view, which concludes that gun ownership is a privilege we must first earn by tested demonstration of knowledge and responsibly competent behavior. To compound our error, American gun advocates erroneously — dishonestly — base our “right” on the willful truncation and misinterpretation of an antiquated second amendment that is merely an anachronism, irrelevant to any modern society. Perhaps the worst error of all is that we as a society reliably fail to call out this immoral stance on its (absence of) merits, this corrosive posturing of willing simpletons.

The resulting difference and its consequence — an unfortunate but inescapable conclusion — between us and nearly everybody else in the world? Between our culture on guns and almost everybody else’s culture on guns? The result is this: America deems senseless slaughter and mass murder, even of children in their classrooms, acceptable — a worthwhile price, dead bodies as tokens of our “freedom”. The slaughter of innocents is of less consequence than being able to own a lethal firearm with few to no constraints and with no more legal, ethical, or moral justification than merest whim.

This is worth repeating, to give the horror of it more time to sink in: In America, we view as acceptable the routine, senseless slaughter and mass murder of innocents. In America, mass-murder rampages, enormous numbers of shattered, blood-soaked bodies, are of less concern to us than being able to own lethal firearms under few to no constraints, and with no more justification for ownership than thoughtless fancy. Does this conclusion shock you? Does it strike you as shrieking hyperbole? Yet it is an inescapable logical result that directly follows from valid, evidence-based premises. Mass murder is an okay trade for idle gun ownership.

More guns, more gun murders; fewer guns, fewer gun murders. This relation is not just common sense, nor does its validity stop at correlation. It is established fact[10]. But many, especially among the ideological right, actively deny this fact, or they willfully ignore it (which is the same as denial), and they frequently throw an infantile fit whenever their proven wrong stance is called out on the facts (this is a particularly immature form of denial). Besides being fallacious logic, this behavior — denial — no matter how vociferous or “sincerely felt”, does not alter the facts, does not change the truth. Nor does denial alter what these facts tell us about the hideous visage that is modern American gun culture. Nor — tellingly — does it change what the facts imply about the moral character of those who willingly choose to bury their heads in the dirt of denial.

To deny verified truth is to be in the wrong — in both senses of that word. It is wrong not only on the facts themselves, but, according to traditional American values — above all, honesty — it is morally wrong. If you deny established truth, your values are incompatible with foundational American values that real Americans all hold dear — those very same values that once had made America the envy of the world, that once had made America a great nation. Due to our enduring, stubborn denial of evidence and truth, we have made of ourselves and our nation a fallen, sad laughing-stock.

It is often said that the root of all evil is the love of money[19]. But one of the hallmarks of the greedy and the avaricious is dishonesty; greedy people always utilize dishonesty to get more wealth. Another hallmark of greed is denial of reality. To be a greedy bastard is to dishonestly deny that societal needs, that the suffering of other people, matter if one is to count oneself a moral and ethical being. Greed and denial both are incompatible with morality and with ethics. Further, to exist, greed and denial both need dishonesty.

Since dishonesty is a prerequisite for greed, dishonesty is the more fundamental characteristic. More broadly, one cannot help but notice that a core requirement for every kind of evil — not just greed — is dishonesty. Dishonesty is the universal common element of evil — the seed from which all evil grows. It is little wonder that dishonesty plays so central a role in the mythologies of every culture. In the third chapter of Genesis, for example, the serpent’s lie — dishonesty — instigates the Fall of Man[18].

So I would point out that the root of all evil is not love of money, not greed and avarice, but dishonesty. As an aside, this is precisely why the very most abhorrent, most reviled character trait in all of science — ask any scientist — is dishonesty. We can conclude, then, that one of the most loathsome human characteristics to find within oneself is dishonesty.

Now that this horse has been sufficiently flogged, we can better appreciate the weight of the moral implication of this statement: if, upon learning that you are factually wrong, you still choose, for whatever reason, to continue to ignore and/or deny the established facts, then you are dishonest. This is a disconcerting result.

If you know someone among the reality deniers — the dishonorable and unprincipled — regarding this uniquely American of problems, then you know that something is wrong with where their head is at. Assuming they are a normal human being capable of introspection, this wrongness, you would think, should cause them to fundamentally question why they feel such a need to deny reality. But it is a defining and quite stubborn characteristic of a person in denial to not question the sources of their denial. Therein lies the rub.

We should be clear that in this case complicating factors are not a valid excuse. Studies have repeatedly shown that one of the most consequential facts of the American Problem is a simple and robust relation, one that is also perfectly in line with the most basic of “common” sense. Nothing about it is unintuitive. As with anything in the real world, there are complications, confounding factors. But all known confounding factors have been proven minor with respect to this simple relation. More guns, more gun murders; fewer guns, fewer gun murders. No complicating factor changes this relation; the evidence shows that it is solid — what scientists call robust. So one does not get to hide behind diversions, red herrings — dishonest changes of subject. And we should not allow them to.

For the good of the country we all care about, and for the good of those close to us, as well as for ourselves — we all have to face this at some point, to ask ourselves this question: where does our denial come from? What is it based on? Somebody else’s dishonest information, perhaps? Ideological bias? What are we actually basing our stance on? Only we, within the quiet of our own selves, can answer this. And once we have discovered it, we must ask ourselves this: does our answer — our truth — sit well with our conscience?

[10] Lankford, A. (2015), “Are America’s public mass shooters unique? A comparative analysis of offenders in the United States and other countries” , International Journal of Comparative and Applied Criminal Justice 40, 171-183. PDF available here: https://goo.gl/5yLL9C.

Now the serpent was more subtil [sic] than any beast of the field which the Lord God had made. And he said unto the woman, Yea, hath God said, Ye shall not eat of every tree of the garden?

And the woman said unto the serpent, We may eat of the fruit of the trees of the garden:

But of the fruit of the tree which is in the midst of the garden, God hath said, Ye shall not eat of it, neither shall ye touch it, lest ye die.

And the serpent said unto the woman, Ye shall not surely die:

For God doth know that in the day ye eat thereof, then your eyes shall be opened, and ye shall be as gods, knowing good and evil.

For the love of money is the root of all evil…