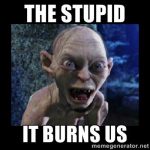 Here are the numbers (WaPo, NYT, and all manner of Fake News):

You lost. It was not a fair contest, since you Republicans prevented thousands upon thousands of those people from exercising their constitutional right to vote. Even so, you lost.

Not so fast, you say? Okay, sure. I can be all lawyery and numbery and elitist and argue totally for you and see where that gets us. This will prove you won, as is only right and fair and just, right? Well, no, but what the hey, I haven’t had my morning covfefe yet, so here we go.

Now, let’s just declare, up front and all obvious-like, that ALL assumptions below are true and in your favor. You might have won after all! (Finally got your attention, didn’t I?)

* That means this is important for you to remember, Roy.

The military votes have yet to be counted. But, taking the tallied votes as reported by 100% of precincts, which is the overwhelming majority of possible legal votes, 49.92% voted for Jones, 48.38% voted for the asshole and child molester—for a difference of 1.54%—and 1.70% threw their vote away in justifiable disgust. A result that differs by 0.5% or less triggers a recount.

Guess what, Roy? You can’t guess? Here, I’ll make it easy: 1.54 is bigger than 0.5—in anybody’s version of reality, including even your magical Land of Nod.

Let’s try another way to view it, which I know is familiar to you and which even someone like you might grok: I believe in my heart of hearts—my heart of hearts, Roy!—that the simple, second-grade math above is true. So, therefore, it is true: you lost. There, does that convince you?

There’s wiggle room!, you say. Well, I’m pretty sure I heard something like that somewhere in your spittle-flinging ranting. Okay—we’re now going to start using the blanket declaration above—suppose ALL of the eligible military voters sent in ballots, and further suppose that ALL of those ballots are valid, and, even further, suppose ALL of those valid ballots were cast for you, the pedophile. Then we have 49.60% for Jones, 48.71% for the Alabamer prevert, and 1.69% for legitimate disgust. 49.60 minus 48.71 is 0.89, which in anybody’s version of reality is also bigger than 0.5. You still lost.

But wait, there could be more, Mr. Moore! (I figure you could never actually think, never mind think of this next possibility all by your widdle sewf, but hey, I’m a nice guy, capable of empathy (I know that word is alien to your kind, but bear with me here), and you’re pitifully pathetic even for a Republican, so here, this is me helping you out.) Suppose, after election officials—granted, election officials work for the evil gubment, so they’re pinko commie socialists committed to restoration of the Great Conspiracy—suppose all of them see the Light of your Righteous Cause and examine each write-in ballot and “discover” that, to everybody’s shock, the ballots are ALL valid, and that they are ALL for Moore the Misogynist. Let’s further suppose, as before, that ALL eligible military voted, ALL those ballots are also one hundred percent valid, and ALL are for precioussss little you.

The probability of this is not significantly different from zero, but let’s suppose all of it is true anyway, since you believe in miracles. Yes, I know, you don’t know what those big therefore bad and evil words mean, so you hatesss them, you do—trust me, that’s okay, I know you’d ignore the concept even if the words consisted of just monosyllabic grunts, your native language. Anyway, the tally then would be 49.60% for Jones and 50.40% for you Mr. Monster! That differs by 0.80%, which is again bigger than 0.5%, but this time it’s in your favor!

Just kidding—you know every bit as well as the rest of us that you lost. As is true for everybody of your mental-midget ilk (that means people like you), you’re a shitty liar.

You’re welcome anyway to wait for the secret agent socialist election officials to examine the write-in ballots, and for that commie USPS to finish delivering the military ballots to the secret agents for tallying, and see if all those improbable things above come true. I have lots of popcorn, and I’m pretty sure everybody else does, too, so we’re all good with that.

Those impossible things won’t happen, though. Sorry-not-sorry, but miracles don’t exist. Reality does. So suck it up and be a Marlboro Man, asshole: you lost. As even Mike Huckabee—Mike Huckabee—said this morning,

“In elections everyone does NOT get a trophy.”

See those quotation marks? That means Huckabee really did write that.

Now, about that miracle recount for which you still insist on throwing a tantrum. Do you even grasp, yet, how dull-witted and infantile this makes you look? No, of course you don’t. Privation of even minimal cognition and mental agility is your problem. (Your therapist can explain this to you.) As mentioned, you don’t qualify for an automatic recount on the taxpayer’s dime. But you could still pay for a recount out of your own pocket, right? People have done that, and you can, too, right? Especially since you’ve been wronged—wronged, how dare they!

Well . . . WRONG, dude. You were seeking federal office. That matters in Alabama. You don’t get to demand a recount for a margin greater than 0.5%, even if you could convince some idiot to pay for it for you (assuming that’s even legal—but remember the blanket declaration at the top of this letter). Alabama state law says this, and it’s crystal clear on the matter. If you have any groveling flunkies left, get one to look it up for you.

You lost. Grow up.