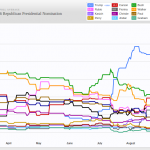 At the moment, The Donald leads nationally among Republicans, with 29.8% favorability. Roughly 30% of polled Republicans currently favor Trump over the rest of the Republican Field of Clowns. People argue that 30 percent is not terribly impressive. Are they right?

You have to interpret more carefully than that. Roughly 30% of polled Republicans prefer Trump over the others. That last bit is important: that many other Clowns are vying for the prize matters in the interpretation of Trump’s 29.8 percent.

In the physical sciences, a result lying three or more standard deviations away from the null hypothesis value is the typical bar for publishable significance. $\mathrm{erf}$ is the error function:

and is the probability of a random variate lying between $-z$ and $+z$ in a distribution with zero mean and standard deviation $\frac 12$. Now, the 0.14% result above would hold if the favorability distribution were a normal (i.e., Gaussian) distribution, which it certainly is not. But the conclusions should correspond closely enough to reality to use as an approximate guide.

Conclusion: Trump’s and Carson’s leads above the rest of this particular Republican Field of Clowns are currently significant, while for the rest it’s a coin toss in terms of preference — even for Bush.

Update 9/10: Numbers and graphic updated from original to reflect values current as of 10 September.