We are stretching our legs from our van ride back to the Thai border through seemingly endless, lush jungle and verdant rice paddies. Despite their tiredness, my eyes feel contented in a way they rarely do; even on a cloudy day, there is no dull color in this strikingly beautiful, oppressed land north of the border. We are returning from an afternoon boat ride along a placid section of the Mekong River, brown and turgid from recent rains. (Monsoon season is near.)

This morning, Lao officials at the border crossing exude hostility toward the three Westerners in our group (me, my wife, and our friend Edlin). We are only able to enter Laos at all by being in silent and submissive tow of local area Thais, who persuade and obtain a price on our behalf. It is a lot of money; we pay. I am compelled to surreptitiously peek my point-and-shoot from my jacket pocket and snap a few pictures of the comically authoritarian border compound. It seems absurdly out of place to me, but I soon learn this is real life for the people here. We had already been warned to keep cameras well hidden, so my wife quickly admonishes me for being reckless.

One of our necessarily few stops along the road is this market, large enough to swallow us in relative anonymity, noisy with garrulous, haggling customers and a tinny radio blaring from some hidden place. Tables are full with fruits and vegetables, most of which I cannot even recognize, much less name. We are strangers, small, incongruous. I wander, senses saturated. Somewhere in the midst of this mélange of colors and shapes, I spy a table that seems odd and walk over to it.

Several richly colored brown hexagonal cells sit empty. These intermittently follow the curved periphery of a spiral assemblage that fills most of a table improvised of unfolded pages of recent newspapers, in colorful Laotian script, atop layers of flattened old cardboard boxes, and supported by mud-crusted, faded white and blue plastic milk crates regimentally stacked two high. From the side, I can see that the insects had built up these paper cells layer by layer, in alternating colors of light and dark brown wood particles. Two different tree barks, I presume. But why did the builders alternate layers across the hive, like sedimentary rock formations? It must have taken some time to finish this repetitive, dull, but necessary task.

Edlin (not his real name) appears and pulls my elbow, insistent. “Come, you have to see this.” Edlin is German, with a big German nose. His new bride is Thai. We’ve all been friends for several years back home in the U.S., where Edlin and she are naturalized citizens. She has the small, button nose typical, she says, of most Thai people. Indeed, among her relatives and childhood friends in Udan Thani, her husband’s much envied, magnificent nose is the first feature they cannot help but stare at. Not his white skin, his odd clothing, the strange American speech, or his funny mannerisms. When they meet him, their children, being delightfully uninhibited as are children everywhere, gape and point and giggle. At his magnificent nose. This amuses but embarrasses Edlin, who is already particularly self conscious about his nose. But in Thailand, where Thais are self conscious about their noses, he is genuinely, greatly admired. For his magnificent Teutonic nose. His face turned red when he told me this. 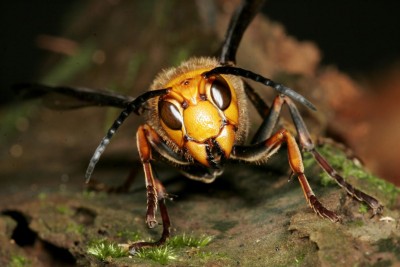 The Asian giant hornet (Vespa mandarinia) is the largest hornet in the world, with a body length of two inches and a wing span of three. Their wings seem too small to lift such girth, much less propel it through the air at twenty-five miles per hour. No human can outrun an angry Asian giant hornet. Normally, they are not particularly aggressive toward us. But these armored, yellow and black striped killing machines are furious predators of other insects—mantises, other hornets, and especially honey bees—which they efficiently dispatch by severing heads with their proportionately large mandibles. Their victims stand no chance of escaping or surviving an attack.

The partial nest I’d been looking at is massive, that piece alone nursery to four or five hundred incipient little monsters. (I did a quick count and estimate.) Later, I learn that this is but one of a dozen or so layers, like floors of a tenement building, that constitute the typical nest. As I’m being pulled away, and not for the first time this trip, I wonder how the dirt-poor employees of this roadside open-air market, or the people from which they bought this disc of horrors, managed to subdue and take the fortress intact—and at what cost.

Apparently, hornet grubs are a delicacy in Southeast Asia. I am normally game to try things strange to me, but not even I am the least bit interested in popping one of these in my mouth. (Perhaps my lunch of spicy shrimp salad—live shrimp salad—aboard the riverboat is exerting a delayed influence.) With their wormlike body segments, these emerging creatures look like large—very large—stubby white maggots with disproportionately small orange button heads at their tips. Their translucent skin glistens, shiny clean; I don’t know why this surprises me. Maybe grubs are supposed to be grubby.

Most of the cells are occupied, lidded with paper-thin, white segmented domes. Some of the domes are bulging, while others have burst. Larvae, large as my thumb, poke half out of their cells, writhing, pulsing, blindly nodding to attract attention and a meal that will never come. Even for a bug enthusiast, up close it is a quease-inducing sight. I am the only one of our party of ten that is captivated, the others having quickly dispersed to find something—perhaps anything—else to ogle. 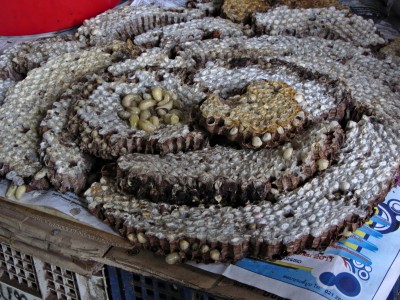 I follow Edlin through a confusing maze of narrow aisles and animated customers to a table in one corner under the large, corrugated-tin canopy. Along the way we pass a battered analog radio (so that’s where it is!) blaring Western pop music. I am immediately lost, so I am glad he knows where he is going.

We arrive. An old woman with gray hair sits on a stool behind the table. I am drawn to her dulled eyes, framed in wrinkles and leathery skin. She seems tired, weary, as does her stool, as does everything else we’ve seen in Laos—cars, fences, roadside businesses, houses and shacks, rafts on the river. (Oddly, the roads are in surprising good shape.) I imagine hers is the weariness of lifelong factory workers drudging their way through endless days at the same unchanging, mind-numbing task. But it is not that. This is how life is here, a culture stuck in a dreary bygone decade. Much of this is likely our—America’s—fault. It is tremendously saddening. I force myself to pay attention. On the table are a dozen or so 750ml bottles of a pretty, dark amber-colored liquid, presumably alcoholic.

Despite being proficient killers, these hornets do not eat their prey. Instead, they carry the massacred back to the nest. There, they chew up the bodies and make a paste with their saliva, which they feed to their larvae. In turn, the larvae secret an amino acid cocktail which the adults feed on, and from which they derive their manic energy and exceptional stamina.

Now I understand Edlin’s excitement. Floating in the top quarter volume of each bottle are drowned Asian giant hornets. The woman has been stuffing bottles of arrak, by bare hand, with groggy live hornets. The amber color has been leached from the hornets by the alcohol, which a label tells me is 45 percent by volume. The soon to be drownees drag slowly about on the table. I think of stingers, and angry wasps, my imagination (I learn later) falling far short. I don’t smell smoke, so again I wonder how they were subdued, and how long this stupor will last. She could probably tell me, but our translator, Edlin’s wife, is nowhere in sight.

V. mandarinia is a forest floor dweller, so it pays to be observant when tromping about in hornet territory. Their venom contains a potent neurotoxin. It can dissolve flesh, leaving behind ghastly craters of destruction. Stings from this hornet are extremely painful. If you are not allergic, a jab or two with their quarter-inch stinger will not kill you. But thirty or more injections will induce anaphylactic shock and even multiple organ failure, landing you in the hospital—if you are lucky enough to be within range of one. The unlucky few are destined for a morgue.

She gestures for us to try a sample. That concentration of ethanol will have killed any bacteria or viruses that had hitched a ride, so I think, why not? Like many of the strange things we’ve encountered in Southeast Asia, the texture is surprisingly complex, vivid, and enjoyable. After a brief pantomimed conversation (we’re getting pretty good at this), we pay for two bottles with the Thai baht equivalent of just a few American dollars. Our respective senses of exploration now fulfilled, Edlin and I navigate the muddy puddles and make our way back to the van.

We get back to Udan Thani and our hotel room late that night, having begged off kind Thai uncles imploring us to an evening of spicy street vendor food, noise, traffic, incomprehensible chatter, and smells of questionable origin vying for olfactory supremacy. I pull the bottle of drowned amber fury from its worn white plastic bag and set it on our room’s little entryway table, on top of a dilapidated pad of paper bearing the hotel’s faded red letterhead. It is only then that I realize the woman had not corked the bottles. It will be impossible to get this home in our luggage. Neither will it be possible for me to drink even a substantial part of this exotic potion in our short remaining time here. Edlin and I commiserate over our predicament the next day. Our spouses are not overly sympathetic. 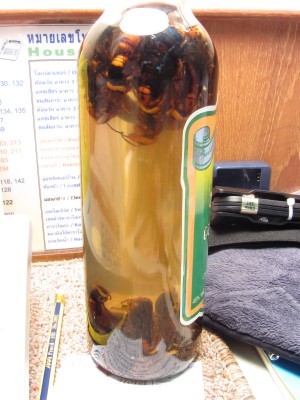