The Gray Man is master behind the government-issue desk, in the gray building, in the gray city, under gray skies brooding over a dun land.

His eyes are small, sunk in oversized sockets. They stare, implacable, dark steel. The Gray Man’s eyes are a lifetime of empty, devoid of emotion, of empathy, of kindness. Of humanity. His mind is narrow and rigid—like his tie, like his long nose—its machinations not reaching his eyes; this is by design. His conscious time is spent plotting, staying two steps ahead of his subordinates, of his superiors, of the authorities, of Stalin. The emptiness of his eyes protects his position, his life. For, in the gray city, to let slip one’s thinking, one’s emotion, if it exists, one’s thoughts—this invites scrutiny, danger. The Gray Man is careful, meticulous; his eyes reveal nothing. Does he look at his wife this way?

The Gray Man is the son of a tailor. Yet he wears a nondescript gray suit that is too big for him. Or perhaps, in his small frame of flesh and bone, he is too small for the suit. The sleeves are almost too short and his wrists are bare. He does not wear a watch. His nose is thin, and long for his face. A small, neatly kept mustache sits above his small mouth. He has dark hair, impeccably neat and trimmed, receding and streaked with gray. The tie he wears is dark, with a small, tight knot that rumples the collar of his starched white shirt. When he smiles, he is almost handsome. He rarely smiles. His posture, the set of his arms on his desk, his face, despite dead eyes, exude authority. He is calm and practiced, accomplished, and he wears it well.

His desk is his, and it is not his. Dark, squat, it presides over this room on the second floor of the gray building, unsubtle, unforgiving, as the unsubtle, pitiless Gray Man sitting behind it presides over the lives of men (and they are all men) he does not know, will never know, can never know. For a government-issue desk, it is ostentatious. Though not overly so: it does not cross the line of attracting too much notice, of inviting scrutiny. If it has been beaten, its scars are well hidden. Someone has polished the stained wood of the desktop. It gleams, and reflects the man behind it. For that is its function. A long, slender pen with a light brown wood barrel, impeccably neat, sweeps back, graceful yet stark, from a black holder at the front of his desk. He does not use this pen, favoring instead featureless, utilitarian, government-issue black pens. A black rotary phone is to his right, far enough away to show that the papers before him, the business at hand, are more important. But it lies within reach, just in case. Across from the heavy wood desk, incongruous in this spartan gray room with the dark wainscoting, sits a plush wingback chair, bright red, facing the desk. Dividing the space between the desk and the red chair, two rows of buttons line the edges of the desktop—like the graceful pen, meant for conveying a message. They tell the clenched-fisted men standing, shaking, before the desk, “I am above your station, I am important, valued; you are not.” A perfunctory portrait of Stalin hangs on the far wall.

The small Gray Man with the unremarkable pen in his hand and the officious papers on his desk is Gábor Péter, head of the State Protection Authority (Államvédelmi Hatóság or ÁVH), hated and feared. He is at the crest of his power, though he does not know this yet. In his rumpled gray suit, starched white shirt, and dark narrow tie with the small tight knot, he calmly presides over his gray office from behind his dark government-issue desk, across from the padded red chair, in the house of terror with its thick—to hide the screams—gray stone and cement walls and floors, home to torturers by day, famous for their brutality, and by night to condemned men in its squat gray bowels, snatched from streets and beds, their broken bodies shrunken from escaped hope, arms over their ears to muffle the agonies of friends and neighbors and comrades screaming, impossibly still screaming, from pointless torture, huddled for weeks on hard, narrow wooden benches bolted to the walls in the claustrophobic basement cells swimming in excrement and piss and sweat and fear, on the northeast corner of the wide boulevard at 60 Andrássy út, across from the Music Academy, a few blocks from Heroes’ Square, on the Pest side of the cold gray Danube, under the baleful skies of Hungary. Gábor Péter has been chief of the ÁVH for five years; ahead lie two more years of dispensing dispassionate, brutal inhumanity before he, too, fails to stay a step ahead of Stalin’s ever-growing paranoia. It is 1950. 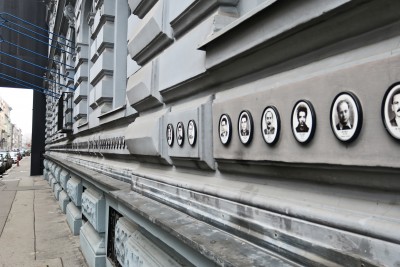 Victims adorn the walls of the Terror House at 60 Andrássy út. (Click to enlarge.)