“Hon, where’s the butter?”—a cartoon on our fridge.

A cartoon hung on our fridge for a couple of years. Its caption became a humorous private code, let’s call it The Code, between my wife and me. The Code is about assumptions, although, as with most frequently revisited negotiations, however small in the wider tapestry of life, a richness to it has developed over time. 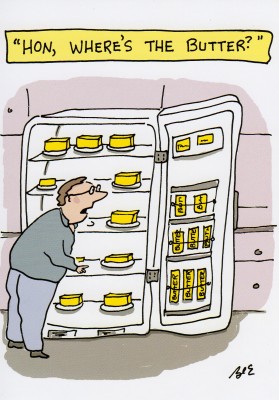 Several years ago, I was searching the house for something (I forget what). I am thorough, and, like all pack-rat tendencied people, I am intimately familiar with all my Usual Locations for this or that object, the particular hierarchy of locations depending on how I categorize the object. They may be varied, but they are specific. I’ve noticed people tend to not believe this of us, because, probably, they are not like that. This is mistaken. I had searched the Usual Locations for where this thing, whatever it was, would have been, had I been the last one to move it. Having exhausted all known possibilities, I finally asked if she knew where it was. The thought of inefficiently looking in random places did not appeal. She interpreted my question as an accusation. I don’t remember it that way. Yet, in light of modern research on the fallibility of our recollections, which apparently are not the recalling of information so much as gap-ridden reconstructions of it, I cannot now be sure. Our brains seem to have uncommunicative minds of their own. Or maybe we still haven’t learned, most of us, to listen very well.

My demeanor can seem stern to others. But I am just being plainspoken. I don’t do sugar-coat very well. My wife excels at social diplomacy. Sometimes, I secretly wish I could do this. I marvel at people for whom this seems effortless (a sign of artistry). This societal expectation of largely inane filler pre- and post-pended to the message content—at times I view it as an affliction—seems in turns silly and exasperating to me much of the time, but even so I just don’t have the ability. (Or is it a skill? I would rather it be an ability, an innate talent, because then I would not be responsible for my learning difficulties with this chore.) Now I wonder: do our individual abilities, or lack of abilities, cause our value judgments? Do I think this inane because I’m not good at it? If true, this is disconcerting: is it even possible, then—especially in light of the spackled-over patchwork that is our memories—for any of us to assess objectively? Anyway, if the proffered filler accompanying a communication is (usually inaccurately) perceived as insufficient or insufficiently deferential to fragile egos, why do most people assume the intent is to attack? Perhaps in addition to physics I should have pursued psychiatry.

“Did you check here? There? . . .” She rattled off the most likely Usual Locations, surprising me with a couple I didn’t know she knew—an indication of how well we know each other, which in hindsight pleases me no end but at the time felt a little invasive, like a private area had been found out. “Yes, it’s not there. Yes, not there, either.” She assumed I had not thoroughly checked the Usual Locations. Or could it be my assumption of her assumption is inaccurate, and I don’t really know where this was coming from? She marched off to physically visit these places and check them herself, fully assuming it’d be sitting somewhere in plain view. As she passed through the kitchen I trailed along, a bit sullen. Try and imagine, if you will, a gait that broadcasts, “Rolling my eyes now”. Telling her that checking the same spots that I had just checked would be pointless would have been pointless. We can both be stubborn. And wrong.

She brought up short, arm outstretched, triumphal finger aimed at the counter. Imagine, I’m sure you can, a posture that fairly shouts, “See, I told you so!” Saying the words out loud would have been redundant. There it was. In the Wrong Location. But right in front of me this whole time, easily seen had I been less narrowly focused on only the Usual Locations. I had passed by it at least three times. I think we both felt a certain amount of smugness in being right, each in our way, neither of us really yielding to the other’s frame of reference, but also a small but significant awakening of awareness, a crack, inside our respective sectarian mental domains. Thus was born The Code, which showed up on the fridge I think a day or two later.

The Code is now a shortcut for reminding that one of us may not see a disagreement about something the same way as the other. “Honey, where’s the butter?” is a not infrequent non sequitur, which is not a non sequitur, in our back-and-forth. Couples and close friends tend to develop such language and (therefore) cognitive shortcuts, which often have their roots in a humorous—hence easily-remembered—episode which they happened to have navigated successfully. We remember these episodes, not always with the greatest fidelity to all the details, but for their lessons and the insights they give us into our personal relationships. And that is the important part.